The Tale of Sir Abel

He is also our sommelier. He has completed his French BP Sommelier qualification and he is a member of the International Bartender Association. He is an international wine judge and a Frenchman. Basically this is a collection of fancy ways to tell you that the man can smell and taste better than you or I. He also has new toys he wants to show you…

Prior to joining us at Sage, Abel has worked as a sommelier and bartender at numerous Michelin-starred restaurants across the world including Michel Trois-Gros in the Rhône Valley which holds the coveted three stars; he worked at Water’s Edge more locally; and he also worked as the booze-PA for INXS at the first Enlighten festival.

Sir Abel has been back and forth between France and Australia since arriving in 2007 to improve his English for a job at Alain Ducasse’s latest restaurant in New York.  However he never made it to the Big Apple – as proper English likely overqualified him for the job – and Australia eventually reaped the reward.

But the man behind the wine is an expert on all things spirituous, professionally and personally. He once spent three months on a whiskey tour of Scotland and Ireland which ended with a few days in Dublin where he made five visits to the Guinness brewery, and he has made semi-annual pilgrimages to the Bundaberg Distillery since being in Australia. All in the interests of research of course.

Recently Abel sat as a judge at the French-Australian Chamber of Commerce and Industry (FACCI) Concours des Vin where he was part of an expert panel that included some of Australia’s finest palates.

But our resident bloodhound has also been made a Knight of Cognac in the Confrerie du Franc Pineau for services to booze – an award I have been working towards for a while in my spare time – and a particularly acute palate. Confrerie translates as ‘brotherhood’ in English which is mysterious enough for a Dan Brown novel but I suspect we can all sleep soundly if the menacing uniforms below are any indication. 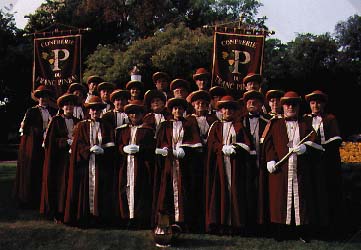 Yep, he’s one of these guys…

Finally, we spoke about his new toy a By The Glass dispensing and preservation system for Sage’s wines. It’s going to allow us to have over a dozen wines by the glass that we can keep fresh and in optimal condition for up to three weeks. Abel says this means we can offer wines that you won’t see elsewhere in anything less than a bottle size.

Abel and his baby

Abel positively frothed at the possibility of being able to show off the finest wines in the world in accessible glass or taste-sized increments. To celebrate he has put on a Moroccan Shiraz and has plans for some wines from Brazil. I asked if there was a reason for the eclectic mix; he gave a delightfully Gallic shrug and said ‘why not?’, which is fair enough really.

Why not come and see Abel and the rest of the team here at Sage for lunch or dinner Tuesday to Saturday, and for a drink at Mint on Friday or Saturday and stick your nose into something interesting with us?